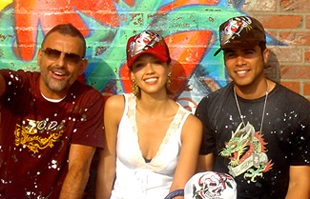 Perhaps the greatest marketing genius in the world today, Christian Audigier first became famous when he turned Von Dutch into a household name. Through his pinstripe designs, Audigier made Von Dutch Originals an international brand, most notably through his famous trucker hat, worn by celebrities and everyday people throughout the world. His ride with Von Dutch lasted a little over three years, before differences in opinion led him to leave the brand behind.

Seeking an exciting, new adventure, Audigier would find his next challenge thanks to the streets of Los Angeles. Taking notice of the flocks of people sporting tattoos around L.A., Audigier was struck with the idea of putting a "tattoo" on a T-shirt. He immediately began his research and repeatedly kept coming across the name Don Ed Hardy, while conducting Google searches and thumbing his way through countless books on tattoos.

Audigier placed a call to the man he refers to as the "Godfather of Tattoo," and soon he was granted the exclusive rights to work with the designs of the famous tattoo artist. Much like he did with Von Dutch, Audigier turned Ed Hardy into a household in no time, becoming the king of the designer T-shirt, and once again seeing his famous trucker hat worn on the streets of L.A., New York, Miami and Paris. In just two years, Ed Hardy by Christian Audigier has established itself at the top of the designer vintage tattoo category, which it principally created. Today, the Ed Hardy line of T-shirts, hats, hoodies and much more is sold in high-end boutiques and high-end departments stores such as Nordstrom, Bloomingdale's and Macy's Herald Square.

In addition to Ed Hardy, as well as his own line, Audigier is also behind SMET, Born on the Street, a cutting-edge rock and roll collection resulting from a collaboration with his long-time friend Johnny Hallyday, the French rock and roll legend. Dubbed the French Elvis for his style and impact on the French cultural scene, Hallyday has amassed 18 platinum albums, 900 songs, 100 tours, 900 million compact discs sold and 17 million spectators at his concerts. The SMET line captures the essence and spirit of Hallyday's epic 40-year rock and roll career.

A native of Avignon, France, Audigier is no stranger to the fashion world. Raised in a single-parent household, he went to work in fashion in his early teens, helping to support his mom, brother and sister. He first developed a denim collection influenced by his passion for rock and roll (he idolized the Rolling Stones) and was soon discovered by a top executive with MacKeen Jeans, eventually traveling the world by the time he was 18.

Audigier later moved to New York, forming his own company and freelancing for some of the biggest names in the denim industry like Guess, American Outfitters, Fiorucci, Bisou Bisou, Naf Naf, Kookai, Liberto, XOXO, Lee and Levi's. He would also help revamp the Diesel brand at one point.

His relationships with celebrities have helped him achieve a stature never before seen in the fashion industry. Britney Spears, who was his very first celebrity client, is part of his who's-who list of celebs that includes Justin Timberlake, Jessica Alba, Paris Hilton, Ashton Kutchner and even the "Material Girl" herself, Madonna. Audigier makes no secret that he has achieved cult-like status thanks to owning the thickest black book of A-list talent in Hollywood.

As I enter Audigier's Los Angeles headquarters for our interview, I immediately notice his young, hip and attractive workforce in the building, most of which is sporting one of his trademark Ed Hardy T-shirts. The sounds of French can be heard in the building as I wait for the 49-year-old Audigier to wrap up a meeting with his attorneys. We soon settle into his office, which is not-surprisingly stacked with rock and roll and celebrity memorabilia. His work space is more like a home, with a large dining table and a couch. There is no sight of an office desk, or even a phone for that matter. As I begin my interview with the eccentric French man known simply as "Le Vif" (the fast one), I soon see the humble and courteous qualities that have endured him to celebrities and everyday people alike.

BCC: Are Friday's always this hectic?

BCC: It's hard not to notice everyone walking around in your trademark clothes.

Audigier: You've got to market the product!