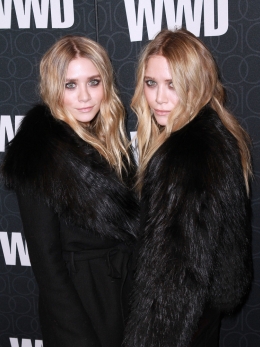 Mary-Kate Olsen and Ashley Fuller Olsen (born June 13, 1986) are American actresses, fashion designers, and businesswomen. Following their acting debut as infants on the TV series Full House, the fraternal twin sisters appeared together in a variety of TV, film and video projects throughout their child and teenage years. Through their company Dualstar, the Olsens joined the ranks of the wealthiest women in the entertainment industry at a young age.

As the sisters have matured, there has been greater interest in their fashion choices, with the New York Times declaring Mary-Kate a fashion icon for pioneering her signature (and now popular among celebrities and fans alike) "homeless" look. The style, sometimes referred to by fashion journalists as "ashcan" or "bohemian-bourgeois", is similar to the boho-chic style popularized in Britain by Kate Moss and Sienna Miller. The look consists of oversized sunglasses, boots, loose sweaters, and flowing skirts, with an aesthetic of mixing high-end and low-end pieces. The twins were tapped as the faces of upscale fashion line Badgley Mischka in 2006.

The Olsens have a clothing line for girls ages 4-14 in Wal-Mart stores across North America, as well as a beauty line called "Mary-Kate and Ashley: Real fashion for real girls". In 2004 they made news by signing a pledge to allow full maternity leave to all the workers that sew their line of clothing in Bangladesh. The National Labor Committee, which organized the pledge, praised the twins for their commitment to worker rights.

The Olsens have also launched their own couture fashion label, "The Row", named after Savile Row in London. In 2007, they launched Elizabeth & James, a contemporary collection inspired by many of their unique vintage finds and pieces in their personal wardrobes. They have also released a women's clothing line for J.C. Penney, called Olsenboye, and a t-shirt line called "StyleMint."

In 2008, the sisters published the book Influence, a compilation of interviews with many of the most prominent people in the field of fashion.

Mary-Kate and Ashley have been criticized by animal rights group PETA for wearing fur and for their use of fur in their fashion line.