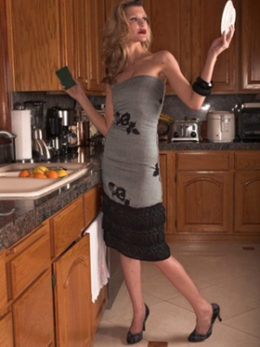 One year later, in 2006, Whitley launched her label in the U.S. The Li Cari label began popping up in chic boutiques across Los Angeles, and eventually Whitley found herself working alongside a bevy of world-renowned designers. One of her first high-profile gigs was the star-studded Catwalk for Charity event, where Li Cari was part of an elite group of fashion labels, including Valentino, Missoni, Pucci and Blumarine.

Li Cari garments convey old Hollywood glamour with a modern twist. Whitley is inspired by "classic cuts and timeless pieces that will never go out of style," she says. "I love the clothing women used to wear in old films, and I love how women used to spend hours doing their hair and makeup and getting dressed. I want to re-create that old Hollywood glamour, but in a more modern, wearable way. Women can look like they've spent hours getting ready when really, they haven't spent a lot of time at all."

Whitley is meticulous about the quality of her garments, using indulgent materials such as silk, fur and lace. She prides herself in the intricate detail of her work, which has attracted some very famous clientele.

Whitley reveals, "I have worked with Mariel Hemingway and her daughter Dree, Michelle Stafford from "The Young & The Restless," Sarah Carter, Erica Rose and musicians Blu Cantrell and Monet Monico."

Whitley is currently working on Monico's wardrobe for her upcoming tour, as well as creating two dresses for the star to wear to the Young Artist Awards and the CARE Awards. Whitley says, "(Monet) is such a doll! I will be on the red carpet at the CARE Awards. I'm very excited!"

Whitley has also worked with Cantrell, a platinum recording artist. The young designer recalls excitedly, "I designed a gown for her to wear to the Rat Pack Ball, which was a very glamorous, old-fashioned, Frank Sinatra-type party."

As for other celebrities Whitley would love to work with, she reveals, "I love Nicole Kidman; she has that beautiful elegance about her. And I like Lindsay Lohan's style; it reminds me of the old Hollywood actress' styles."

"I love everything classic," she admits.