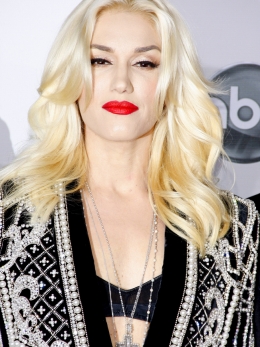 Gwen Stefani is an American singer-songwriter, fashion designer and occasional actress. Stefani is the co-founder and lead vocalist for the rock and ska band No Doubt.

Stefani made most of the clothing that she wore on stage with No Doubt, resulting in increasingly eclectic combinations. Stylist Andrea Lieberman introduced her to haute couture clothing, which led to Stefani launching a fashion line named L.A.M.B. (Love Angel Music Baby) in 2004. The line takes influence from a variety of fashions, including Guatemalan, Japanese, and Jamaican styles. The line achieved popularity among celebrities and is worn by stars such as Teri Hatcher, Nicole Kidman, and Stefani herself. In June 2005, she expanded her collection with the less expensive Harajuku Lovers line, which she referred to as "a glorified merchandise line", with varied products including a camera, mobile phone charms, and undergarments. In late 2006, Stefani released a limited edition line of dolls called "Love. Angel. Music. Baby. fashion dolls." The dolls are inspired by the various costumes that Stefani and the Harajuku Girls wore while touring for the album.

In late summer 2007, Stefani launched a perfume, L, as a part of her L.A.M.B. collection of clothing and accessories. The perfume has high notes of sweet pea and rose. In September 2008, Stefani released a fragrance line as a part of her Harajuku Lovers product line. There are five different fragrances based on the four Harajuku Girls and Stefani herself called Love, Lil' Angel, Music, Baby and G (Gwen).